If you’ve stepped outdoors at some point, you’ve probably been stung by a wasp. It’s a common experience no one wishes to repeat. The friendly bumble bee’s belligerent cousin is truly a pest to watch out for, and there are many variations in the Bay Area to know. 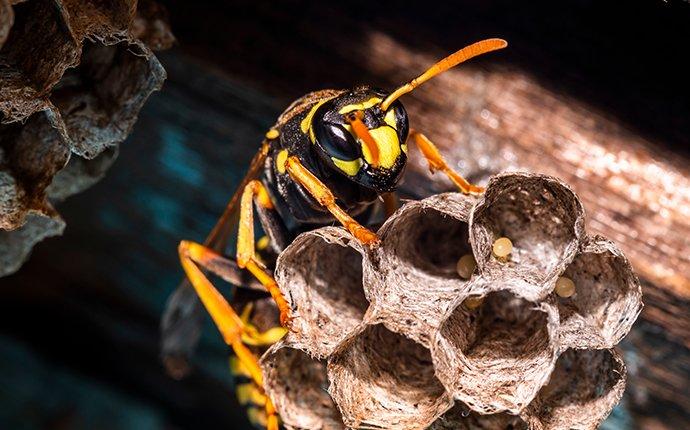 While there are several stinging insects in the area to be wary of, not all of them are aggressive. It’s important to know which type you’re dealing with, so you don’t try to exterminate the aggressive ones yourself.

Paper wasps are semi-social, living in small colonies.  The following are characteristics of a typical paper wasp:

Yellow jackets are social wasps and quite aggressive.  You can identify them by looking for the following:

Mud daubers are not social, and they earned their name from the nests they built out of mud. The following are typical characteristics of a mud dauber:

Like mud daubers, they are solitary wasps. You can identify them by looking for the following:

Earing their name from their propensity to eat tarantulas, this wasp is surprisingly not aggressive towards humans. The following are characteristics of a tarantula hawk:

What Should I Do If I See A Nest?

There are many methods to avoid when you want to get rid of a nest. There are some definite “don’t-dos” such as: lighting the nest on fire, standing on a ladder to knock it down, hitting it with a baseball bat or broom handle, flooding it, or covering it with a trash bag. These are all excellent examples of how to get stung, repeatedly.

So, what’s the proper method? Ideally, call a pest control expert immediately. The sooner the better. While far-away nests and non-aggressive wasp species may not merit a call, abandoned nests still pose a danger as they can become home to more dangerous species. Knock the empty ones down at the end of each season, and be sure you can identify them so you know what you’re dealing with.

Reach Out To The Experts At Bay Pest Solution

Bay Pest Solution is your best bet for safe wasp removal. Most wasp stings are painful, but the more serious threat is an allergic reaction from a sting which can be life-threatening. Schedule your free inspection and receive a ten percent discount on select plans when you buy online. Bay Pest Solution will keep you safe year-round, and especially from the stinging insects that are plaguing your home. Call Bay Pest Solution to schedule your free inspection, and don’t wait until you’ve been stung or your house is overrun.

Bay Pest Solution rodent proofed my condo on the outside so that the mice/rats couldn't get into my walls and keep me awake at night with their scratching. I'm leaving this highly satisfied review after 3 months of no issues with rodents getting into my walls.